Druminar™ is a new twist on the concept of team-building. Motivate Your Team with Drums

Regardless of the size, age, or composition of your group, Drum Circles channel the power of music and percussion to bring people from large corporations, small businesses, or students of any age together as a team. 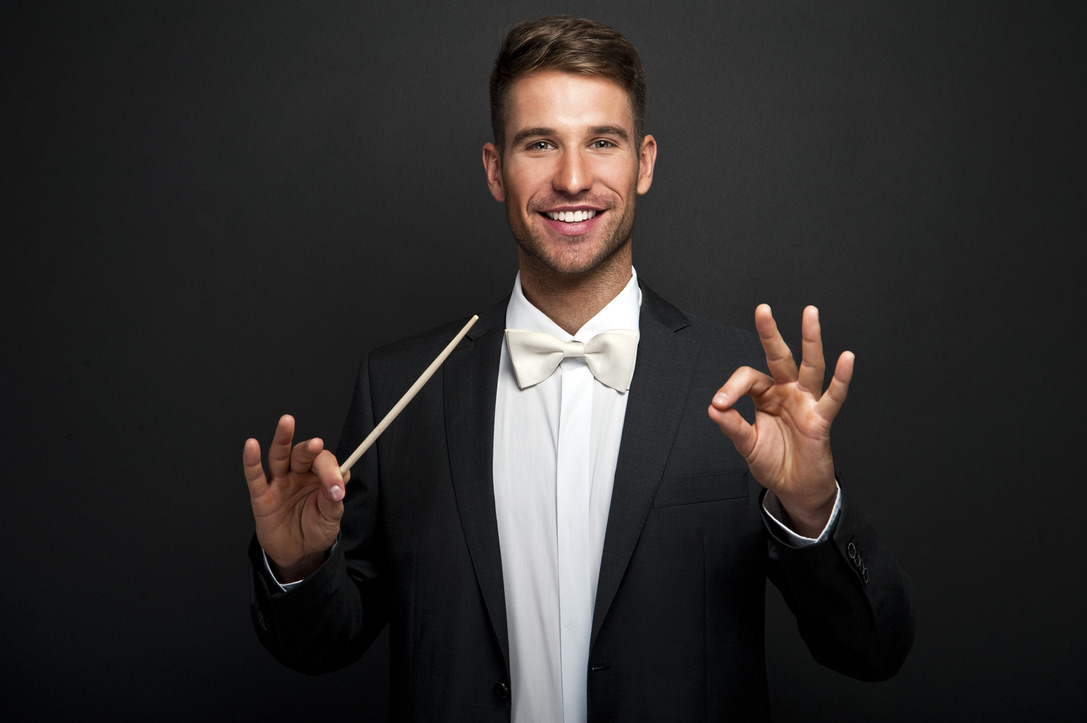 Learn How to Conduct an Orchestra

Our Maestro will demonstrate the significance and importance of clarity, expressiveness, preparation, and confidence needed to be a successful leader and manager. The symphony  conductor is used as a metaphor for your CEO.

Conductors and CEOs both need to be persuasive and passionate to execute their vision and inspire their work force. Druminar  leadership development sessions are amazing at demonstrating how your team can be resilient, innovative and flourish in any environment by utilizing the compelling leadership qualities of a symphony orchestra conductor.

Musical and percussive concepts, along with interactive exercises, help participants identify and replicate experiences of highly engaged teams in the workplace.

Our Maestro will demonstrate the significance and importance of clarity, expressiveness, preparation, and confidence needed to be a successful leader and manager. The symphony  conductor is used as a metaphor for your CEO.

Our certified facilitators are experts in training and organizational development to help engagement, motivation, and communication for your team.

Maintaining employee morale and engagement is a top priority for companies.

“Key findings from Society Human Resource Management’s research:
When considering the future of their workplace for the rest of this year, HR professionals reported that organizations are prioritizing efforts to focus on improving the talent challenges from the past year. This includes addressing employee morale, as well as retaining and recruiting talent.”- from SHRM Presents State of the Workplace Study 2022

Reported that maintaining employee morale and engagement is a top priority.

Some of Our Clients 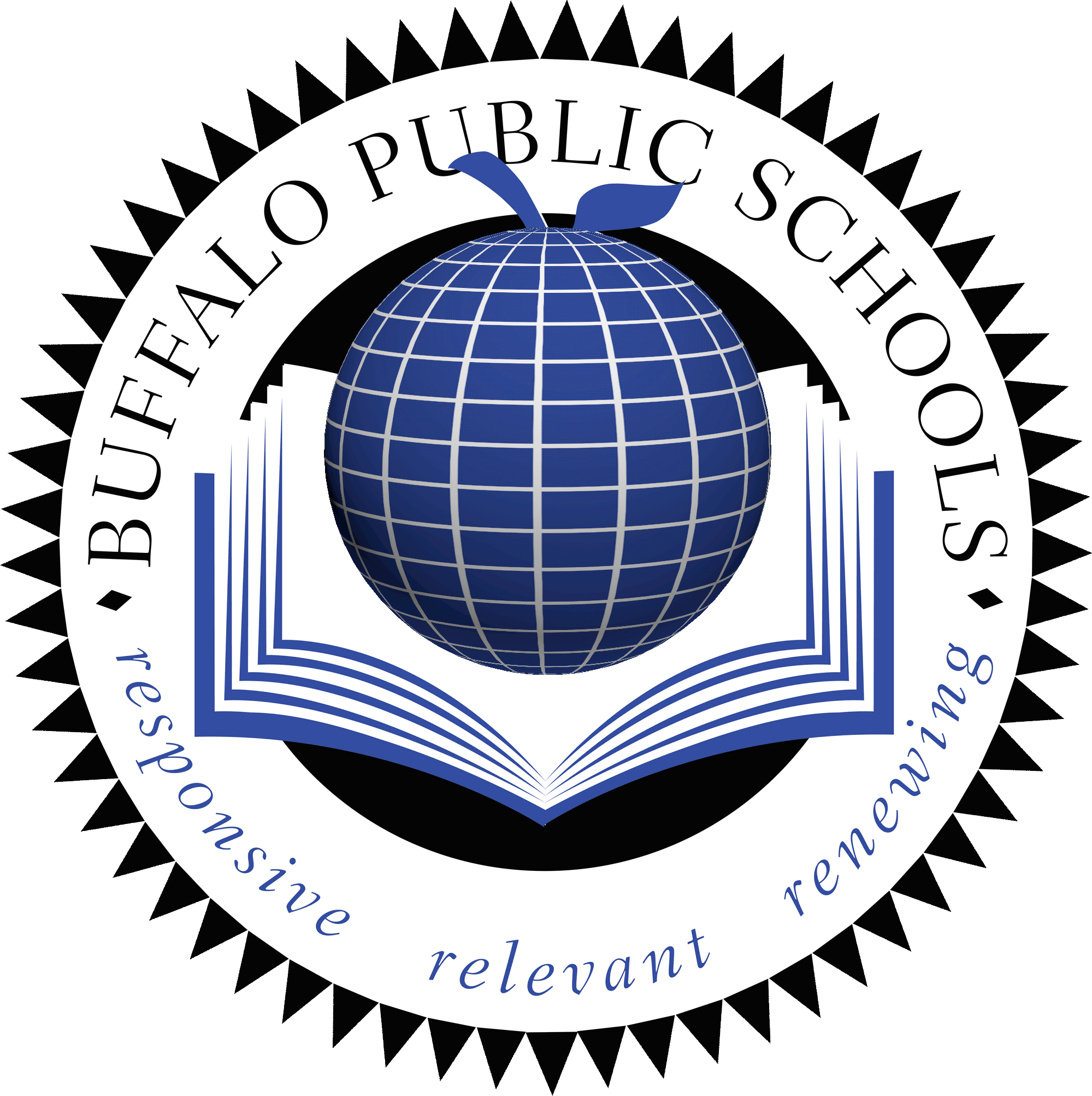 Using guided rhythmic activities and discussion, participants take team-building to the next level. Everyone on your team is given a special drum or percussion instrument to play. Our certified facilitators employ an interactive, hands-on approach to help participants gain personal insights and group connections, leading to personal and organizational growth. In addition, our Conductor will teach your team the skills needed to be a conductor and a successful leader.

No prior musical experience is required to participate!

This program is designed to teach both managers and employees the value of highly functioning teams, resulting in increased levels of employee/team engagement and business performance.

The symphony orchestra conductor is used as a metaphor for your CEO. Our Maestro will focus on developing leadership skills for the corporate environment. Your team will see examples of full conductor scores and learn the basics of various beat patterns used by conductors. They will also experience the  significance of clarity, expressiveness, preparation, and confidence needed to be a successful leader and manager.

Druminar™ is perfect for conferences. Whether it’s for kick-offs or closings, retreats, conventions, or seminars, you will create connections between participants that will last well beyond your event. 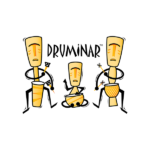 For quotes on our drumming programs, please contact us. We can deliver this unique experience at your venue or arrange a suitable venue for you.

What is a Drum Circle?

A drum circle is any group of people playing hand drums and percussion instruments in a circle, or similar format to create in-the-moment music. They can range in size from a handful of players to a circle with hundreds of participants.

The drum circle is led by a facilitator who guides the group through various rhythms and rhythm-based activities. A drum circle is highly interactive and does not require any prior musical knowledge by the participants. Because each group is different, each rhythm-based musical experience is unique.

What are the benefits of Drum Circles?

Drum circles can be used for corporate settings, educational groups as well as conferences and events. There are numerous positive benefits of using drum circles, including:

Do I need to be a drummer to participate?

No! In fact, you do not need to have any prior musical knowledge. The program facilitators will teach you everything you need to know to participate throughout the Druminar™ event.

How many participants can you accommodate?

Our sessions can range from 15 to 150 participants. It all depends on your location.

Where are your programs held?

For logistical convenience, most sessions are held at Kleinhans Music Hall in Buffalo, NY. However, we can always come to your facility!

I’m ready to book an event. What comes next?

If you’re ready for a quote on a corporate or educational drumming program, please contact us.

We will deliver this unique experience to your venue or can arrange a suitable venue for you. We provide all the drums needed for your program or event.

Remember–no musical experience is required! Let us provide a powerful drumming experience that will have a lasting effect on your team! 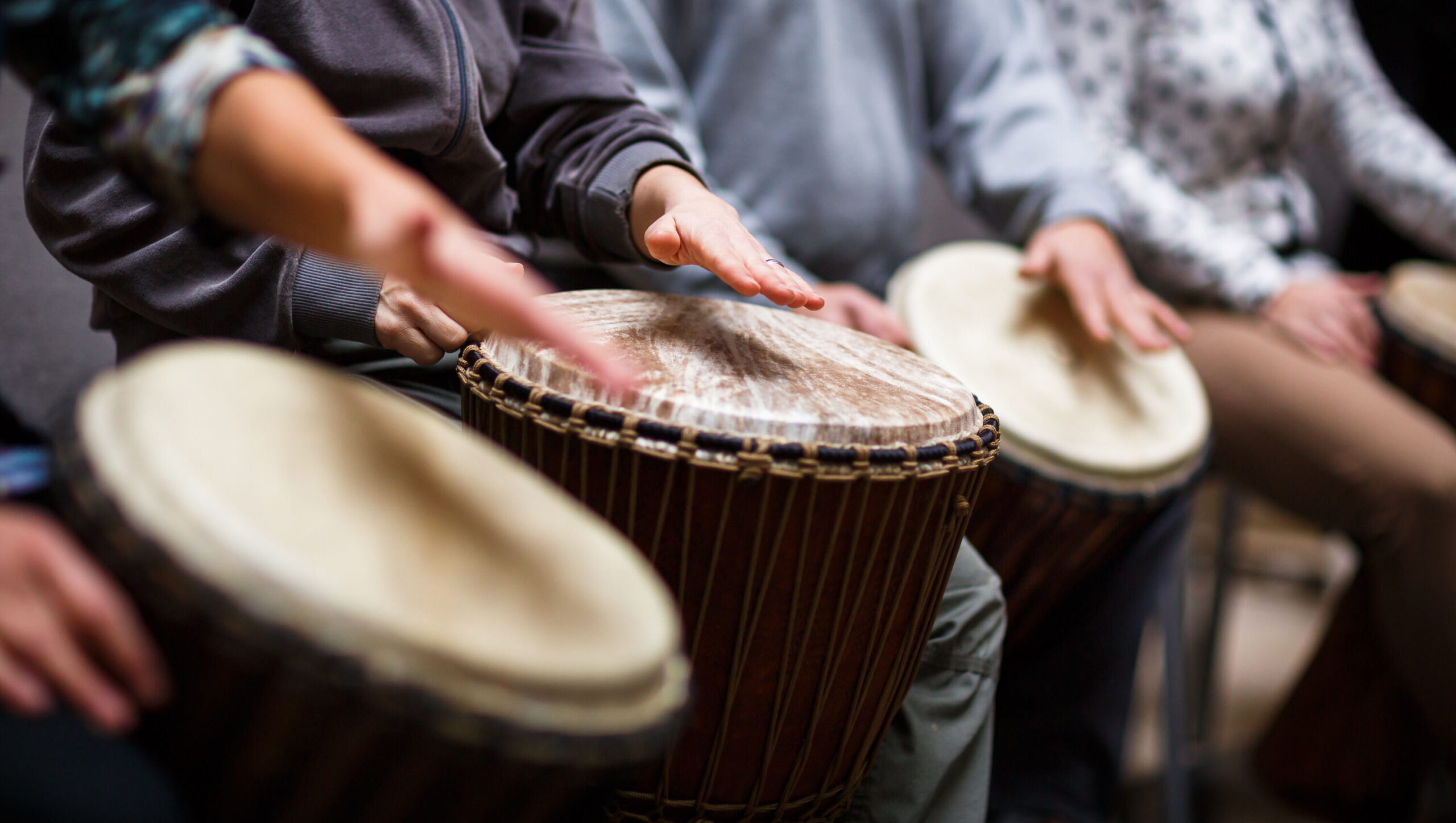 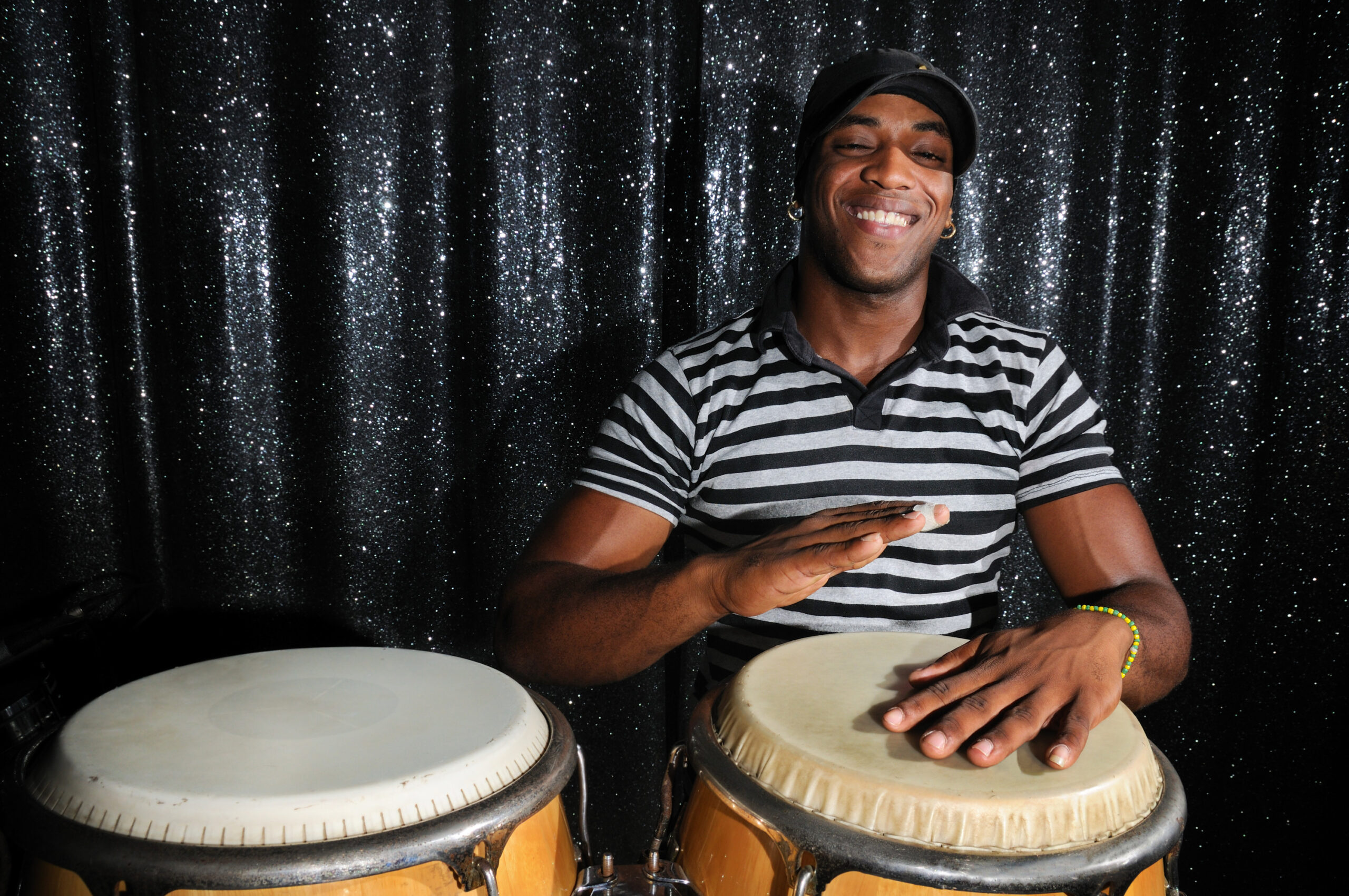 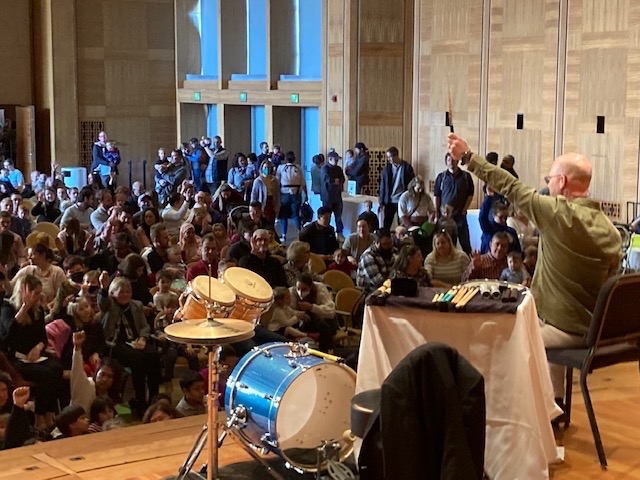 What They’re Saying About Druminar

The Druminar has been the talk of the past few days. I can’t tell you how many of the SDPs have referred back to something that they picked up at the Druminar and used as a link. I had them do a brief presentation this week and it was absolutely overwhelming the learning that came as a result of spending time with you, Mark, Robert, and the rest of the team. I think that you are really on to something very big. Congratulations!

Conductors and CEOs both need to be persuasive and passionate to execute their vision and inspire their work force. Druminar  leadership development sessions are amazing at demonstrating how your team can be resilient, innovative and flourish in any environment by utilizing the compelling leadership qualities of a symphony orchestra conductor.

I can honestly say that Druminar provided a very unique opportunity for our team to work together in unexpected ways and that the new perspectives will certainly be carried forward!! 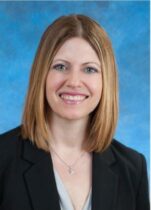 Jamie Shrock is the co-founder of Druminar and is an accomplished professional with more than 20 years of human resources, leadership, and organizational development experience in multiple industries, including Banking and Health Care.

Shrock has a strong track record of assuming positions of increased accountability and career expertise in designing, creating, and leading innovative programs and systems to enhance corporate culture, improve employee performance, and support organizational change. She is a passionate, resourceful, Inclusive, people-oriented leader who develops teams of human resources professionals and senior leaders.

Currently Jamie is the Senior Director of People Operations and Culture at Circuit Clinical located at its headquarters in Buffalo, NY.

Little known fact about Jamie: As a former professional musician, she has held both management, contracted positions and appeared as a soloist with multiple symphony orchestras throughout the United States. She has performed in some of the most prestigious halls, such as The Kennedy Center in Washington D. C. 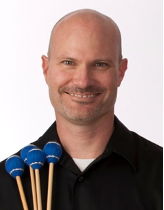 In addition to his orchestral appointments, Hodges is an active music educator. He currently is a member of the percussion faculty at the Eastman School of Music/University of Rochester, the State University of New York, Buffalo State College, and an Adjunct Assistant Professor of Percussion at the Greatbatch School of Music at Houghton University. He also is a clinician, adjudicator, and lecturer of percussion throughout the United States. Highlights include The Percussive Arts Society State and International Conventions.

Hodges holds degrees from the Cleveland Institute of Music/Case Western Reserve University, Capella University, and the University of Cincinnati/College-Conservatory of Music.

Little known fact about Mark: Mark has performed many concerts with some of the top rock and pop artists including The Moody Blues, Sarah McLachlan, The B-52s, Johnny Mathis, Stewart Copeland (The Police), Lou Gramm (Foreigner), Burt Bacharach, Olivia Newton-John, The Temptations, and The Four Tops. 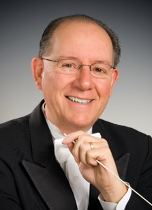 Druminar Facilitator Paul Ferington is hailed as a "distinguished Guest Conductor" by the Buffalo News. Ferington conducted the Buffalo Philharmonic Orchestra for over 25 years as a member of the executive conducting staff. During this tenure, he conducted the orchestra in over 400 concerts in the U.S. and Canada. In addition to his conducting, Maestro Ferington is Professor Emeritus from the Niagara campus of State University of New York (SUNY) and was awarded the SUNY Chancellor’s Award for Excellence in Teaching in 2005. During his 32 years as an academic educator and administrator, Maestro Ferington served in major roles such as Division Chair of Fine Arts and as Vice-President for Academic and Student Affairs. He has supervised over 400 full and part-time faculty.

Little known fact about the Maestro: Ferington has conducted the Buffalo Philharmonic Orchestra and chorus every July 3rd to an audience of over 16,000 people for over 18 years.

Bankers get management training through conducting